INTERVIEW: Holland Wants to Make the Playoffs, Doesn't See Being a Top Team 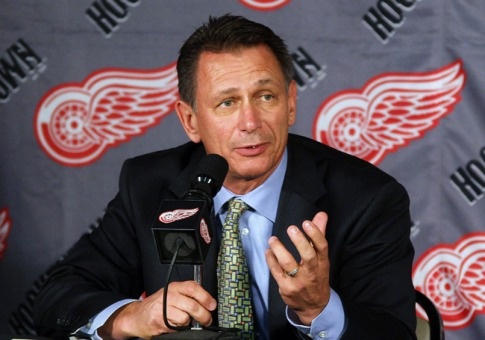 Interviewed during the May 24 Grand Rapid Griffins game, Holland spoke about parity and how he hopes the team makes "the party" next year.

Strangely, a few minutes later, he contradicted himself, saying "You don't get dramatically better in a short time."

He also said the team took great pride in being the last team in the salary cap era to not make the playoffs.

Holland also brought up blowing the 3-1 series led to Chicago in 2013 and blowing the 3-2 series lead against Tampa in 2015. Holland has stated several times over the years that these losses to good playoff teams led him to believe the Red Wings were close -- which is why they kept signing free agents and trading away young assets.

Holland was happy with Dylan Larkin's play at the World Championships. He also said Howard was good at the Worlds. Holland said several Grand Rapids Griffins will compete for a spot on the team.

Holland said he hoped 3 to 6 of the picks in the upcoming draft wiill be Detroit Red Wings several years down the road.

"Our goal is to make the playoffs next year. But to think you're going to rattle off four or five Final 4s in a row and win the Cup in 97, 98, 02 and 08, nobody else has done it," Holland said. "Even Chicago has won three cups. They might win four. You've got to get marginally better every day, every month and every year."

Holland said the teams at the top of the league today often went 8-10 years without making the playoffs. He obviously doesn't want to pay that price.