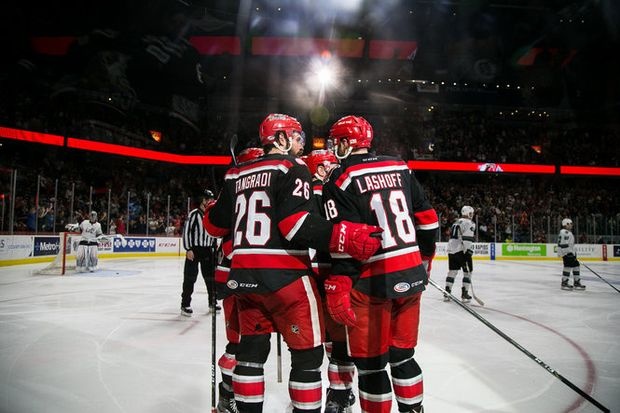 Congrats to the Grand Rapids Griffins on qualifying for the Calder Cup Finals. Griffins fans, I'm sure, are stoked about the start of their series against Syracuse, a rematch of the 2013 finals won by Grand Rapids.

The 2013 team featured Tomas Tatar, Riley Sheahan, Landon Ferraro, Luke Glendening, Mitch Callahan, Adam Almqvist, Joakim Andersson, Gustav Nyquist, Danny Dekeyser, Louis-Marc Aubry, Tomas Jurco, and Petr Mrazek. And Jan Murask - who was, in my opinion, the best player on the ice in almost every game in which he played. I'm still salty he didn't get a better look in Detroit under Coach Mike "Sizequeen" Babcock.

That group represented the future. It was the kids leading the Griffins in 2013. Their success made me feel a bit more positive about the future for a greying Red Wings team.

Sure, the team had Fracis Pare and Nathan Paetsch and Jeff Hoggan and company. But it was future Red Wings leading the charge.

Today's Griffins team has a few future Red Wings. Evgeny Svechnikov and Tyler Bertuzzi are probably the most promising. Tomas Nosek, Robbie Russo, Joe Hicketts and Jared Coreau all have a shot to fit in one day.

But this Griffins team feels like its about Ben Street, Eric Tangradi, Matt Lorito, Kyle Criscuolo and Mattew Ford -- older guys who really aren't likely to be part of the Red Wings' future. Even a Mitch Callahan or Martin Frk is a longshot to make the Red Wings' at this point.

The Griffins have some Red Wings prospects on their roster. Besides the guys already mentioned, you've got Axel Holmstrom, Filip Hronek, Christoffer Ehn, Ville Saariharvi and Givani Smith sitting in the press box.

If all those guys were taking regular shifts, along with Svechnikov and Bertuzzi, I'd care an awful lot more than I do right now.

But they're not playing. So the best I can muster is, good luck Griffins fans. Hope you enjoy the fun.