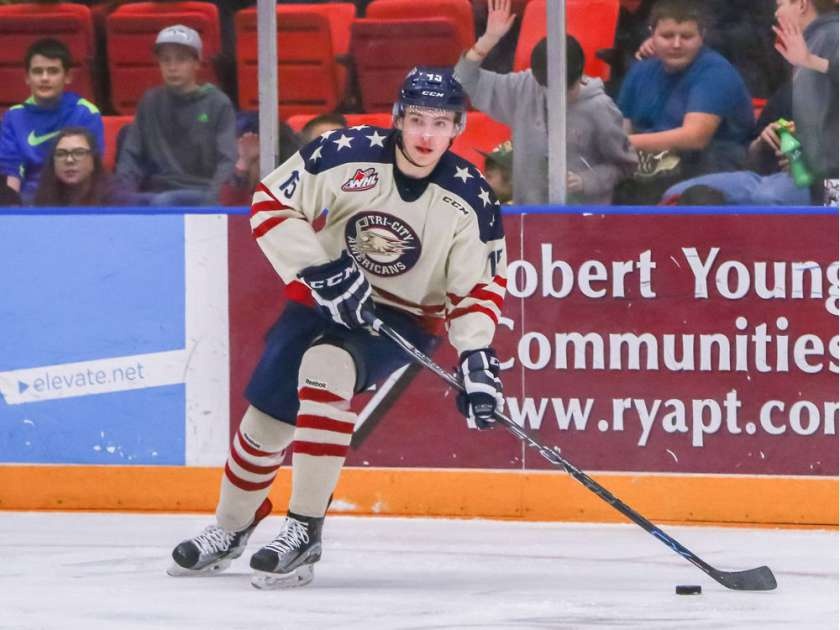 The Detroit Red Wings have selected C Michael Rasmussen from the Tri-City Americans with the ninth overall pick of the 2017 NHL Entry Draft.

Ken Holland explained what he liked about Rasmussen to NBCSports.

Here's how he was ranked in various publications

ISS rates him as the second best goal scorer in the draft.

Tri-City's 1st Rnd. Pick, 7th Overall in 2014 Bantam Draft, Rasmussen is a big power forward that is a physical presence when he is on the ice. He is a very powerful skater and once he gets going, he is hard to stop. Uses his size very well to win space, protect pucks and win battles. Scoring at a torrid pace until he missed last 22 games of the season, but seems like more of a playmaker than a goalscorer at the next level. Knows where his teammates are all the time. Willing to go into the corners and in front of the net and uses his feet well to control the puck along the boards and on faceoffs. Skates very well for a kid that size. No issues with his stride, speed should continue to improve as he adds strength to his massive frame. Acceleration needs work but nothing that shouldn't take care of itself in time

ISS says he's a second line center who can play in all situations, in any role. His style is similar to Nick Bjugstad, according to ISS.

McKeen's likes him too, but they acknowledge some differing opinions on Rasmussen.

To those that like him, they see a Nick Bjugstad type, who has shown signs of being able to dominate at the NHL level when he is healthy. Imminently worthy of a pick in the top 15 or even 10. To his detractors, they see Brian Boyle. He can play in the NHL, but never above the  depth lines.

Rasmussen fell out of favor with many draft watchers because more than 50 percent of his production came on the powerplay (highest percentage in the draft, Bob McKenzie noted during the broadcast).

Have to hope that Holland knew that and was picking based solely on potential.

His work ethic has also impressed as he battles hard in all three zones, whether that is his willingness to use his imposing frame to play in the dirty areas, or to clog passing and shooting lanes in his own end. He understands how to position himself when off the puck and how to take advantage of what his gene pool has provided. Although he is not a physical punisher, not really looking to hurt anyone out on the ice, Rasmussen does not let his elite size go to waste. To summarize the above, there is a lot to like about Rasmussen. There is, however, a downside. 55 points in 50 games is all well and good, but 29 coming on the power play is a strong statement that he was not so effective at even strength. Further, a heavy proportion of his goals came from in tight, raising questions about his shot release