Athanasiou, Mantha and Bertuzzi Reflect on Productive Camp in Detroit 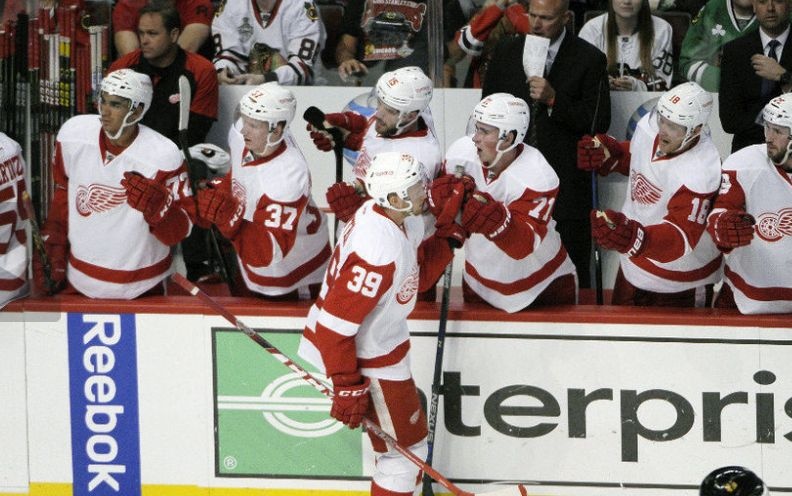 Athanasiou (4-3-7, +5), Mantha (3-3-6, +3) and Bertuzzi (1-4-5 +4) were the Red Wings top scorers in the preseason (not to mention the Red & White game). They out scored future Hall of Famer Henrik Zetterberg. They outscored goal scorers Tomas Tatar and Gus Nyquist. The outproduced hotshot rookie Dylan Larkin.

That they produced the way they did and were sent back to Grand Rapids tells you a lot about what does and doesn't get decided in the pre-season. One decision that appears to have been made, however, is that Athanasiou and Mantha will have the chance to keep that chemistry going in Grand Rapids, according to Mlive's Peter Wallner.

"I saw that Double-A and Mantha had good chemistry in Traverse City and we'll start the season with that (line) and see how it goes," Nelson said. "Mantha, he has good size and he has deceptive speed and Double-A skates extremely well.

Athansiou told Wallner he believed he was NHL ready.

"I had a good preseason there and did the best I could, obviously, and I know it's a deep roster up there and not much room ... I thought I had a little bit of a chance there, but it's unfortunate right now but I'm happy to be here. There's a great group of guys down here."

Mantha shared his marching orders from the Wings.

"Stay consistent for my whole game, every game," Mantha said. "That's what they want me to do up there (in Detroit) and that means skating hard every game, winning my one-on-one battles and maybe getting a few points, few goals and maybe have some time on the penalty kill. Who knows? It's just the little details I need to work on and keep pushing forward."

Bertuzzi is starting his first pro season. Still, he hoped he might stick in Detroit.

"It was a great experience to be up with the pros and get my first NHL games in," Bertuzzi said. "Just a great learning experience to know what it's like to play at that level. It's obviously tough to get sent down but I'll develop down here and hopefully I'll get a chance up there."