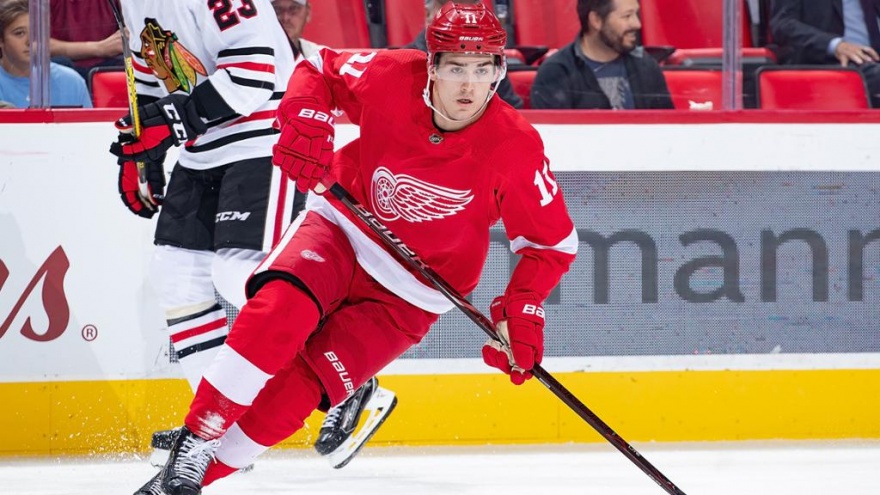 Filip Zadina, making his NHL debut this afternoon, is our @Huntington_Bank Player to Watch! #LGRW pic.twitter.com/lkXrMbAPoi

Happy Filip Zadina debut day! Here's a dumb viz showing how he's racked up his points over the season pic.twitter.com/SynPAPkMNW

Zadina out there with Glendening and Rasmussen.

Zadina pretty decent forecheck first time up the ice. Good work on the boards the second time, but lost the puck. SJ turns up the ice and gets two chances - scoring on the second one.

Shift two starts with Rasmussen and Glendening. Puck out of play seconds into the shift. Resumes after the commercial and spends most of the time in the Dzone. Zadina clears it downt the ice for the change - after crossing center.

Glenny came out with Helm and Abdelkader. Looks like the rookies get a shift off. The kids come out with Larkin instead for an Ozone faceoff. Detoit controls the draw but SJ goes down the ice and gets a scoring chance. Zadina tips the puck out of play in the neutral zone. Shift over.

Again, Glendening with Helm and Abby. Looks like Blash's plan is to double shift Larkin with half his shifts with the rookie. At least as long as the grinders play well. Is that De La Rose with Zadina and Rasmussen? Yep. So scratch the doubleshift comment. Wings can't get the puck out.

Looks like LCA jumping puck today. Helm scores with Glendening on an ugly goal by Dell.

Zadina back out with de la Rose and Moose. Puck out of play. Line comes back out after the TV timeout. Can't gain the line with possession, but at least nothing happens in their own end.

Love the AA-Mantha chemistry. Looks like the kids are reallly staying the de la Rose for now as Glendog comes back out with Abby and Helm. Blashill skipped the kids in the rotation this time. Nyquist scores. Looks like Shift 6 will wait until the second period.

Unfortunate goal against off Ramussen's skate. But the Wings got penned in pretty badly and the Sharks had their only real dangerous shift on the ice with Zadina-Glendening-Rasmussen together. Blashill switched to the Helm-Glendening-Abby line and they responded with a mini-breakaway for Glendening. The line comes back out and scores. So I don't think we're going to see much more Zadina-Glendening-Rasmussen.. Expect to see Zadina with de la Rose and then maybe with Larkin, when he double shifts, and on the PP, as the game goes on. Not a fan of Zadina and Rasmussen together because Rasmussen has very little neutral-ice/transition ability and that's an area where Zadina can get himself into trouble. But the Wings don't have many options at center,

Abdelkader and Helm, meanwhile, are playing some of their best hockey of the season. Think they don't see all these kids and realize they better step up if they want to remain NHL regulars?

Zadina finally out around 4 minutes into the period. With DLR and Moose. Can't get anything going. But at least they're in the Ozone. Zadina got cute in neutral ice and nearly gave it away. Line got a shot attempt that was blocked at the end of the shift. Zadina lifted the stick and stole the puck and passed to Larkin whose shot was blocked.

Not much action for the kid with all the penalties. He's out with 11:16 to play. Not much happening. Coughed it up in the Ozine corner. One shot against from Thornton.

Only 6:30 left and Zadina still not on the ice. Too many Dzone faceoffs. Finally, after Burns goal, Larkin plays with Rasmussen and Zadina. Shift cut short by Ericsson minor penalty. Pavelski scores on PP to tie the game

Looks like Zadina got skipped last shift as DLR and Moose played with Larkin. Now Zadina is with Nielsen and Rasmussen. They spend  20 seconds in their own end, watching SJ play catch.

Not much to report. One shot attempt with Zadina out there was blocked. Through two periods, it's the only shot attempt for the Wings with Zadina on the ice. There have been six against. Clearly, as this game has gone on and the Sharks started turning it on, coach Blashill determined he couldn't play Zadina much.  Two powerplay opportunities were denied. On the first, Athanasiou coughed up the puck and Larkin took a penalty on the backcheck. On the second, with an extra attacker on the ice and Bernier at the bench, Abdelkader passed to Green for Detroit's third goal.

Zadina delivers a hit - or close to it. Wings had some pressure but the Sharks got a great chance late in the shift on a near 2 on 1.

Zadina, DLR and Moose out there for the second shift of the period and they go offside. Now there's a commercial break. Like three of Zadina's shifts have been interrupted by commercial breaks. When play resumed, it was a new line. So it was a very short shift.

AA draws the penalty. Will Zadina see time? He's out there with Nielsen 12 seconds into it. Nothing happens. One pass to the point.

Zadina out there late with Mantha and someone else. But a longshot was gloved and held and we go to a commercial break. Back from break, he's with Bertuzzi and Glendening.

After SJ's EN goal, instead of Zadina, Blash goes with DLR, Abby and Helm. Weird. But Glennie comes out with 14 seconds left with Zadina and Moose. Glendening wins the faceoff and Zadina gets a shot away - but it's deflected away.

I'm not sure anyone had any right to expect much of Zadina with Glendening as his center. But then Vanek got hurt in practice yesterday and Rasmussen took his spot. Rasmussen's game, outside the crease, isn't very effective. So you have a defensive/forechecking center, a netfront guy who can't skate with the puck, and a sniper.

That line was destined to fail. And after two shifts, it was dismantled.

Problem was, replacing Glendening with de la Rose didn't do Zadina any favors.

Bottom line, it was a pretty quiet game. Zadina didn't show us much. But he didn't look bad either.