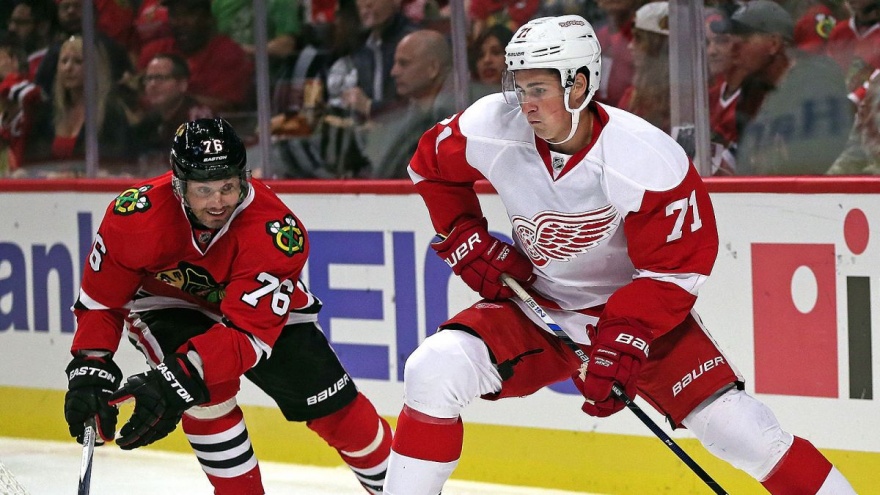 A little past the quarter-pole, it’s time to grade the Detroit Red Wings.

The team is 12-8-3, and at a game over .500 they’re in a playoff spot. They sit in seventh place with 27 points (they’re tied for fifth with Pittsburgh and Boston, but those teams have played fewer games and have more wins).

Basically, the Detroit of this year is a lot like the Detroit of the last two seasons: Middle of the road, good enough to get in the playoffs, but not a contender by any stretch of the imagination.

Offensively, the Wings are 21st in the 30-team NHL with 2.39 goals per game. Although they’ve improved, the Wings are still near the bottom of the league in shots, averaging 27 per game (28th in the NHL.

Defensively, Detroit is slightly above average, giving up 2.52 goals a game. In terms of shots on goal, the Wings have improved since their shoddy start and they’ve given up 30.4 shots per game (7th highest).

The Red Wings’ powerplay has scored on 16.7 percent of its chances, 23rd in the NHL. The penalty kill is successful 84 percent of the time, good for eighth.

Faceoffs have hurt the Wings’ possession numbers. They’re winning 48.2 percent of the faceoffs – 25th in the NHL.

Henrik Zetterberg (4-16-20 +0) -- A – Zetterberg has been the team’s best player, carrying the team early in the season. Looks as strong on his skates as ever even as he continues to lose foot speed. Having the speedy Larkin on his wing has created some room for him out there.

Dylan Larkin (9-8-17 +13) --  A – Speedy, strong on his skates and smart. Larkin has been a revelation. He’s playing above his head because simple hockey works in the NHL. He has burned several defenders with his speed, Defenses who focus on Zetterberg are paying a hefty price because Larkin can burn them.

Tomas Tatar (8-9-17 +0) – B- -- Coming around after a very slow start. Seems to struggle with unforced turnovers. Can’t argue with the stats, but there’s room to improve.

Gustav Nyquist (8-6-14 +0) – B- -- Hasn’t been as careless as Tatar with the puck, but has also lacked Tatar’s intensity along the boards and been weak on the puck. Still, he’s been a big producer for Detroit. Remember, too, that the expectations are higher now for Nyquist with the big contract.

Teemu Pulkkinen (6-5-11 +2) – B- -- Very good production, considering his role. But outside of production, Pulkkinen offers little else to the team. Playing now with Datsyuk and Richards, he needs to show what he can do.

Mike Green (1-7-8 -5) – B – Starting to show what he can do, offensively. Defensively, has been better than advertised. He’s been our best defenseman this year.

Nicklas Kronwall (1-7-8 -5) -- C – Offense hasn’t been there for Kronwall and defensively, he’s showing signs getting older, slower and more worn down.

Riley Sheahan (3-3-6 -5) – C- -- Has bounced around the lineup, but still had plenty of powerplay time. He’s been mediocre in most facets of the game. 47 percent on faceoffs is just the start.

Danny Dekeyser (1-3-4 +1) – C+ -- Hasn’t been so surehanded and smooth thus far. Was always a little overrated in Wings’ circles. The biggest issue is that his strong positional defense hasn’t been as reliable.

Darren Helm (0-3-3 -6) – D – It’s got to suck for Helm to be buried on line 4 in a contract year. He doesn’t quite seem as fast as he was. At the same time, he seems easier than ever to push off the puck and hasn’t been very effective along the boards. The fourth line is just loading up on minuses.

Luke Glendening (1-2-3 -8) – C- -- Looks a lot more like the Luke Glendening of his rookie year than last year’s SuperGlennie. Frankly, the fourth line hasn’t been good this year. The saving grace for Luke has been faceoffs.

Brendan Smith (1-2-3 +3) – C- -- Sat out after a couple of boneheaded plays. Smith’s blunders seem to end up in the back of the net an awful lot. At the same time, we never seem to see Smith’s upside. It’s a mystery when Dekeyser plays point on the second powerplay unit ahead of Smith.

Pavel Datsyuk (2-1-3 +0) – B- -- Datsyuk has showed flashes, but he hasn’t been the same guy. And at 37, those flashes are less frequent. Still, his return seems to have rejuvenated the Red Wings and given the team good matchup advantages. Also, he’s winning 52 percent of his draws.

Drew Miller (0-1-1 -4) – D- -- You need your fourth line to contribute a little bit, and Miller seems to do the least with the best chances.

Alexey Marchenko (0-1-1 -4) – C – Hasn’t produced offensively, but has been fairly steady in his own end. Shows good smarts on offensive zone pinches. Smarter than Kindl, Smith and Ericsson.

Joakim Andersson (0-0-0 +1) – D- – Hasn’t played well when used, which isn’t often. Andersson will probably hit the waiver wires when Jurco is ready, unless another injury strikes the Red Wings.

Andreas Athanasiou (1-0-1 +) – B – Played well in limited minutes. Should be the Wings first call up.