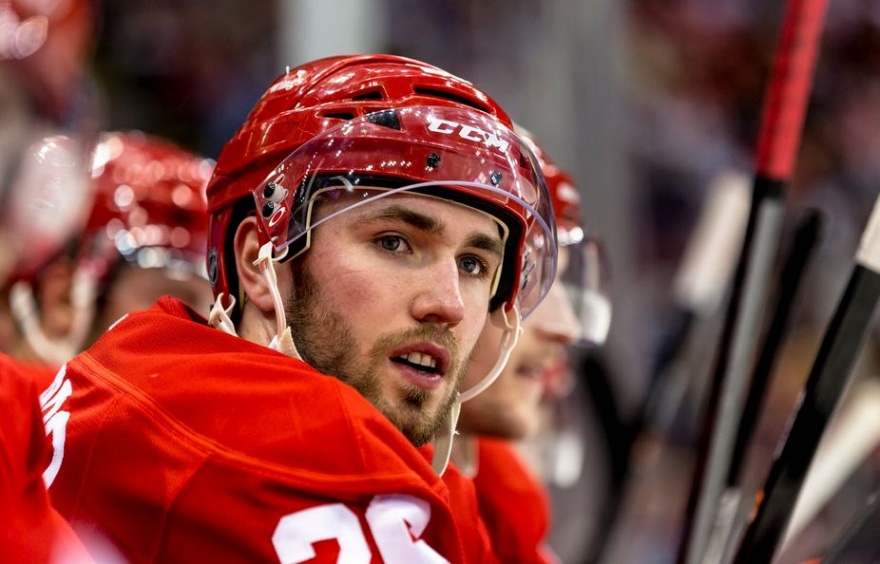 Ferraro, son of former NHLer Ray Ferraro, was drafted 32nd overall in 2009 by the Red Wings. The 6’0, speedy right-handed winger had just scored 37 goals for the Red Deer Rebels in his draft year. Scouts loved his speed and loved his shot.

For whatever reason, Ferraro never built on that year. He followed up with a 16-goal, injury-plagued season in Reed Deer and was traded to Everett, where he scored just 10 goals. The Red Wings signed Ferraro and he continued to struggle with injuries and a lack of production in Grand Rapids (56 games 9G 11A) as a rookie. But in 2012-13, Ferraro turned it around during the Griffin’s Calder Cup season. He scored 24 goals and 47 points in 72 games while taking a regular shift on the penalty kill.

Because of his speed and work on the penalty kill, Ferraro seemed like a natural fit to slot in on the Wings fourth line. Even with youngsters Gus Nyquist, Tomas Tatar, Tomas Jurco and Riley Sheahan all getting playing time, there was room for another jack-of-all trades kid like Ferraro on the fourth line. He could line up at any forward position and play on the penalty kill.

But so could Luke Glendening. And Glendening was 20-pounds heavier – a significant factor for a coach who demanded his team play “heavy.”

Glendening won the fourth line job and Ferraro went back to Grand Rapids.

In 2014-15, following camp, Ferraro was out of options. He was waived. Nobody claimed him. He returned to Grand Rapids for a fourth season. Ferraro resurrected his career with a 27-goal campaign (24 goals at even strength). The Red Wings called Ferraro up late last season. He scored his first NHL goal April 11 – the game-winner in a 2-0 win over Carolina in the last game of the season.

He made the Red Wings out of camp to start this season. He played in 10 games for the Wings, usually playing 8 to 12 minutes a night on a defensive line and the penalty kill. He got hurt in early November and by the time he was healthy, Pavel Datsyuk and Brad Richards were in the lineup.

The Wings waived Ferraro and he was picked up by the Bruins. He finished his Red Wings career with one goal and 18 shots in 17 games.

He’s playing largely the same role in Boston now, where he has two assists in three games, all of which were won by Boston (Oddly, Ferraro’s teams are 10-2-1 when he plays.)

Ferraro needed out of Detroit. He was never going to get a shot here. He was behind Drew Miller on the depth charts. At the same time, up-and-comers like Andreas Athanasiou, Anthony Mantha and Tyler Bertuzzi show good size, speed and skill. Athanasiou and Mantha could play right now. Not to mention that Dylan Larkin won a job out of camp.

Ferraro didn’t get much of an opportunity in Detroit. And his own struggles didn’t help matters.

He deserved a shot at NHL job after 2012-13, but the Wings already had five (six including Joakim Andersson) rookie/sophomore forwards in the lineup.

In Boston, he’s in virtually the same situation. He’s essentially the 12th forward right now, and when the Bruins get healthy, unless he finds a way to stick, he’s going to be in the pressbox, and possibly on waivers again.

Landon Ferraro has the speed, the shot, tenacity and defensive awareness to play in the NHL. But it’s up to him to prove he belongs.