Jimmy Howard is Losing Games at an Alarming Rate 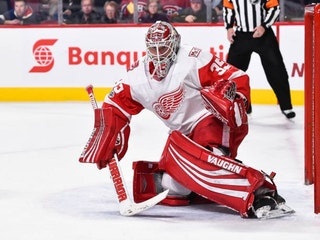 By mid-November, I had to somewhat begrudgingly give Jimmy Howard credit.

While Petr Mrazek, my choice for Red Wings starter, was sputtering, Jimmy Howard was off to a great start. He seemed to be proving last season's stats, accrued during an injury-shortened season, weren't a fluke.

Going into 2016-17, the net was Mrazek's to lose. He'd been great in Grand Rapids. He'd been good to great in Detroit. Meanwhile, Howard had just completed his third straight subpar season. And for the third straight season, the Red Wings finished the playoffs with a goalie other than Howard between the pipes.

But while Mrazek melted down in 2016-17, Howard posted very good numbers. His 2.10 goals against average was the lowest of his career. His .927 save percentage was the best of his career. Sure, he only started 24 games because of injuries. But those were great numbers.

And truthfully, Howard finally looked comfortable in goal after years of looking like a stressbucket.

So the 2017-18 season starts and Howard is the starter. Coach Jeff Blashill made it clear from the start. Early on Howard's play enabled him to keep his starting job. Mrazek's play didn't give anyone much reason to question Blashill's decision. Howard won three games, posting a .955 save percentage.

That's when the wheels fell over. On Nov. 19, Howard and the Red Wings lost to Colorado in overtime, 4-3.

Since that day, his numbers are scary.

Several in the Detroit Red Wings press have suggested the Wings might trade Howard at next year's deadline. But who would take him? He's been at .910 or worse every year but once in the last five seasons. He's been at 2.80 twice in the last three years. Even when he had nice stats last year, he couldn't win games.

The smart time to trade Howard would have been in the offseason, when he was coming off a nice season. Or perhaps, early this season, when he was rocking a .935 save percentage and goalies were dropping like flies around the NHL. But Ken Holland believed this team was a potential playoff team - which tells you all you need to know about Holland's assessing ability.

The really bad news is that the Red Wings have no strong goalies in the professional ranks. Jared Coreau, 26, appears too slow to be an NHL goalie.  First round pick Thomas McCollum, 28, is not NHL material. Maybe there's something in Matej Machovsky, 24, but he's only got three AHL games under his belt and he seems like a longshot.

Prospects Filip Larsson, Joren Van Pottelberghe and Keith Petruzzelli would appear to be at least two or three years away from cracking the Red Wings.

So, sadly, the Red Wings might resign Jimmy Howard after next season. So, unless Chris Ilitch cleans house or Ken Holland has his heart set on managing in Toronto or Seattle, expect three more years of mediocrity between the pipes and a whole lot more losing in the standings.