Cold Shoulder: Were the Red Wings Showcasing Athanasiou in November? 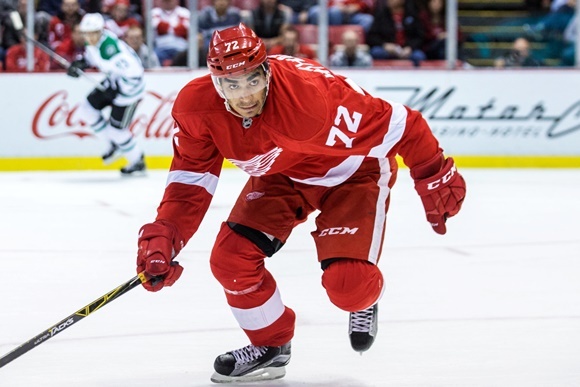 When was the last time you felt good about the Red Wings this season?

It started with Detroit losing 2-1 to Columbus in a ridiculous 18-shot shootout. It continued with Detroit’s most convincing victory of the season, an 8-2 hammering of the Calgary Flames. Detroit followed up with a 3-1 victory over Buffalo. And even the next game, a 4-3 overtime loss to Colorado, gave Detroit a fourth straight game with at least one point.

During that four game stretch Andreas Athanasiou averaged 18:28 a night. He scored four goals, assisted on two others, and fired 12 shots on goal. In two of those games he played more than 20 minutes – totaling three goals, an assist and nine shots in those two games.

During that four game stretch, Athanasiou played with good linemates.

The situation was similar against Calgary. He played 10:31 with Tatar and 10:22 with Larkin. Still a positive in Corsi, but not as dominant. Athanasiou scored once at even strength, and then added a goal and assist on the powerplay. Larkin also had a goal and two assists. Mantha had two goals and an assist. But you could see Athanasiou’s even strength time start to go more towards the fourth line. He played 3:43 with David Booth and 3:43 with Scott Wilson. During those shifts, the line was dominated (1 CF for and 7 CA).

Athanasiou played one more big-minute game, playing 18:43 against Buffalo in a 4-1 win. He picked up an assist on Tatar’s goal. But you can really start to see Athanasiou’s linemate usage scattered here as Blashill employed 11 forwards. 6:03 with Tatar and 4:34 with Larkin. 3:07 with Wilson and 2:30 with Mantha. 2:19 with Abdelkader, 1:54 with Zetterberg and 1:51 with Nyquist.

And lastly, against Colorado, Athanasiou bounced around the lineup (5:03 with Mantha, 3:46 with Jensen, 3:31 with Larkin, 2:36 with Tatar, 2:13 with Abdelkader and 1:13 with Nyquist). Athanasiou’s Corsi numbers were pretty awful, but he did manage to score a goal and take two shots in just 13:49.

The next game out, Athanasiou posted an ugly -4 while playing 8:46 with Larkin and 7:09 with Tatar.

Since that game, Athanasiou has topped 16 minutes of icetime just once. He’s eating goals against at an alarming rate.

His icetime has plummeted. He’s far more likely to play with career fourth liners like Wilson and Booth and the unproven Martin Frk.

So we can see what happened.

Taking a regular shift with Larkin and Tatar, Athanasiou was productive.

Since playing on the scattered line (two third of the fourth line plus wherever Blashill subs him in), his numbers have fallen off. His CF is not very good (-6). He’s -6 at 5-on-5 goals against.

So the question is, why?

Why did Athanasiou go from 8 minutes with Martin Frk on Nov. 9 to suddenly playing 20 minutes – most of them beside Larkin? Up until that point in his career, Athanasiou had never played more than 20 minutes in a game.

Blashill is no fan of Athanasiou. I think that’s clear. And the feelings are mutual.

So here’s a potential clue.

On Nov. 14, Lyle Richardson reported that the Ducks were trading Sami Vatanen and that they wanted a left-handed, left-winger in return. A couple weeks later – perhaps after Ken Holland was told “thanks but no thanks” by Ducks GM Bob Murray, Vatanan was traded to the Devils along with a conditional draft pick for Adam Henrique, Joseph Blandisi and a third round pick.

So there you have my theory.

Blashill and the Wings were showcasing Athanasiou for a trade – potentially for Vatanen. Once the potential deal fell through, Athanasiou returned to Line 4, where his game has withered and died.