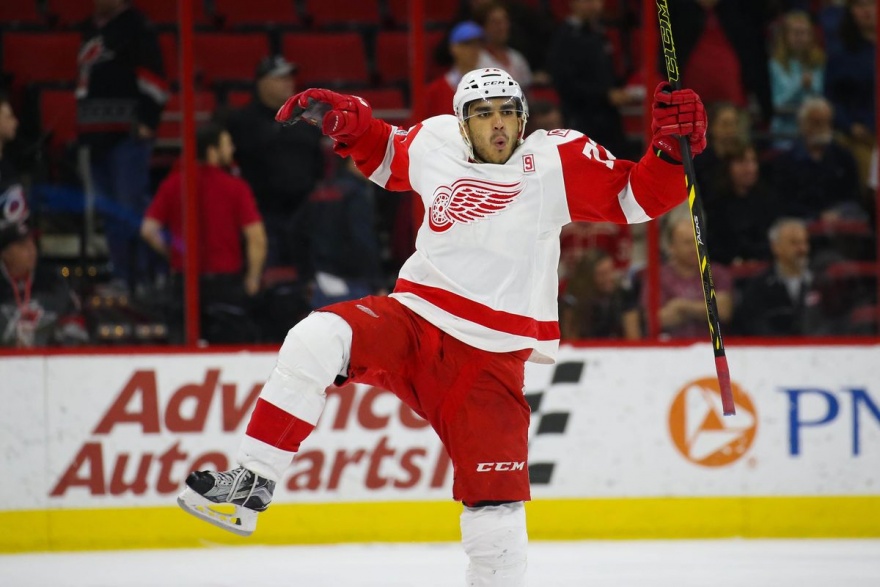 I have higher hopes for Andreas Athanasiou than most.

I see lots of skill, world class skill and the ability to take over games, when Red Wings head coach Jeff Blashill isn't trying to lobotomize his game. And while I lay considerable criticism at the feet of Detroit's feckless coach, the truth is Athanasiou needs to take some responsibility and improve his own game. He's 23 years old. He'll be 24 before the next season starts.

Here's how Andreas Athanasiou can take his game to the next level and become a star.

Watch the hit Andreas Athanasiou lays on Peter Holland. Where the hell did THAT Athanasiou go? Athanasiou has become soft. Too soft. He doesn't like to get hit. He doesn't hit. He always pulls up short and waves his stick at a guy and then backs off. Athanasiou needs to use his speed and size to hit guys. To skate through them. To stop pussyfooting around the ice.

Athanasiou sometimes demonstrates a devastating north-south game. But he needs to develop some East-West game to buy himself more time in certain situations. Too often, he skates full speed into the defense and they deflect the puck away into the corner. If Athanasiou can learn to slow it down and curl into the corner, or bounce around to the outside, he can buy time and allow his teammates to catch up.

It seems like Athanasiou is one-and-done on a shift. One sprint up the ice and he's wasted and looks gassed the rest of the shift.

Athanasiou's offensive zone play is inconsistent. Sometimes, he makes terrific passes. But sometimes he seems indecisive and allows the puck to roll off his stick for a turnover. A lot of this comes down to patience and poise. And a lot of that is confidence. But he needs to stop forcing passes that aren't there. And he needs to show patience in his shot selection, too. Part of this relates to point two, about an east-west game. If Athanasiou can learn to change speeds, he's going to catch a lot of NHLers off guard.

If Athanasiou never gets any better than he is today, he can become a good NHLer simply by dedicating himself to backchecking. Learn to love it. Take satisfaction from frustrating opposing forwards. He's got the speed and size to be an elite defensive forward. All that's missing is desire.