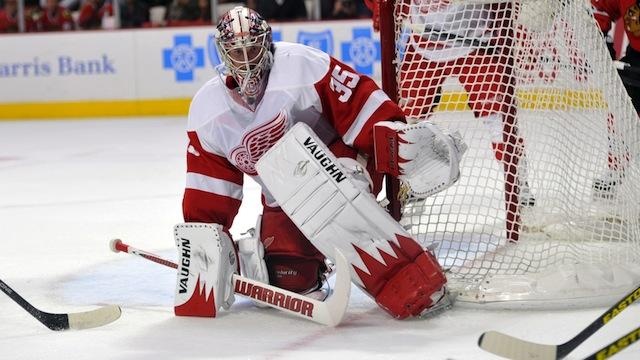 Every week, RedWingsNow assesses the state of the Detroit Red Wings. An A+ grade means the Red Wings are playing like a Stanley Cup contender. And F grade means this team is headed toward the bottom of the standings.

The Red Wings had their worst week of the season. The team lost three straight games in regulation –the first time it’s happened since October. They finished with a 4-3 win over lowly Buffalo and they looked terrible in victory.

It wasn’t just the losses – it was the way they lost. They lost the three games by eight goals. They blew a 2-0 win and let Pittsburgh dominate the final two periods. They blew a 2-0 lead in the win over Buffalo. Then they blew a 3-2 lead. After taking a 4-3 lead, they defense somehow led Zack Bogosian skate in a on a breakaway in the final minute.

For the first time all year, the Wings status as a likely playoff team looks iffy.

Smith  - Goal and two assists in four games. He still looks awful defensively at times, but it’s hard not to like his production lately. Smith now has seven points in eight games, just three points behind Green and four points behind Kronwall.

Marchenko – Led all Red Wings in icetime against Buffalo, a reward for a solid campaign from the Russian rookie. He’s like a slower, right-handed version of Dekeyser. Makes the smart plays. What he lacks in speed he makes up for with great positioning. 3 points in nine games after one in his first 23. He’s starting to get involved offensively.

Jimmy Howard – Howard allowed 7 goals on 20 shots and appears to be out of Blashill’s 1A/1B rotation.

Tomas Tatar – Finally had a decent game against Buffalo, but even with two points, he’s only got three points in nine games.

Dylan Larkin – 2 goals and 2 assists in his last 10. Not terrible numbers for Larkin, but he’s clearly seen a fall in production.

Jonathan Ericsson  - Back from injury and he’s been terrible. Giveaways. Not physical.

Joren Van Pottelberghe – The Swiss goalie prospect drafted by the Red Wings last spring has had a couple of very good games for Switzerland at the WJC and he’s earned a contract offer from HC Davos in Switzerland.

Martin Frk – Scored his 10th goal of the season Sunday. Since getting a job in the Griffins’ lineup Dec. 09, Frk has 7 goals and 6 assists in 10 games. He’s also +7. He’s fired 34 shots on goal. Frk, in his third year with the organization, appears to be earning a second contract with Detroit. The Wings will probably have to waive Frk and return him to Grand Rapids next year. But he’s rescued a career that was headed nowhere.

Evgeny Svechnikov – Has looked flat and clueless at the World Junior Championships, where has no points in five games. Svechnikov has been productive in Cape Breton this year, but the reviews are mixed.