by Tran Longmoore
in
Game Day 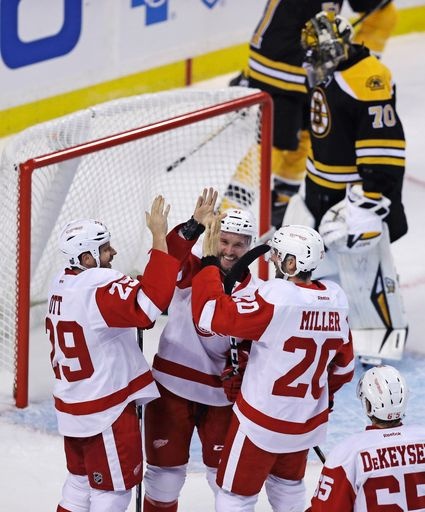 Athanasiou-Larkin-Mantha
The line played a very good, but not great game. Outside of Athanasiou's pass to Mantha for his goal, the threesome didn't show much chemistry.
Athanasiou - His great speed made him dangerous on several occasions, but he still needs to show a bit more patience and ability once the rush gets stopped. Showed good backchecking with two takeaways, but still doesn't have the best coverage when Detroit gets pinned. Seems to be developing some ability setting up behind the net.
Larkin - Credited with 4 shots on goal. Had a great one-timer on the powerplay in the opening period, but Subban made the save. The big number here is 14 faceoff wins vs 6 faceoff losses. Defense was nothing special but poor either. Didn't show the passing touch you'd ideally like from a center.
Mantha - 1 shot. 1 goal. Was a big load in front of the goal. Didn't have an amazing game. Neither Athanasiou or Larkin did a good job feeding him the puck, which is what you'd like to see when you have a sniper like Mantha.

Miller-Glendening-Ott
Has the potential to be an abrasive fourth line. Showed some offensive ability too. Line combined for 3G and 5A and was +9. There were a couple shifts where this line got caught running around in its own zone.

Miller - 1G 1A  and could have had more if he cashed in on a breakaway. Looked good on the PK too.

Ott -- 1G 2A. Took a roughing penalty. Somehow he wasn't credited with a hit, which doesn't seem possible, but maybe it's true. Ott seemed to lose his point man a few times, including one awkward blocked shot whiff that gave the Bruins a great scoring chance. People can whine about Ott all they want, but this was a no-risk contract and Ott gives Detroit an agitating pest it's lacked for years (Babcock just never seemed to let Tootoo do his thing). Let's not forget that a young Steve Ott also scored 22 goals. He's got some some idea of how to play in this league, if he's not too worn down. Ott also went 7/10 on faceoffs.

Bertuzzi-Turgeon-Nastasiuk
This line, which looked kind of big out there, had one good shift in the first period but was mostly a non-factor as a unit.
Bertuzzi - He was the best of the bunch with 3 hits and a shot. Bertuzzi made two really sharp passes to help the Wings get the puck out of their zone and on to the attack. Worked the boards well. He needs better linemates to show what he's got.
Turgeon - Mostly invisible but for one shift in the first period. Was good on draws (6/10). Has what looks to be NHL size but seems to move a little slow out there.
Nastasiuk - Only played 11:37 and didn't make any kind of dent on the scoreboard (No hits, no shots, no nothing). Nastasiuk showed a willingness to work the wall and seemed to anticpate plays well. Like Turgeon, he's going to need to be faster to make a case for the NHL

Sadowy-Criscuolo-Frk
These guys looked pretty good at times, especially on the powerplay. Criscuolo scored a powerplay goal and Sadowy had six shots on goal.
Sadowy - Was mostly invisible despite six shots on goal. Played netfront on the second PP unit. Not very physical and lacks skating ability. Sadowy has to work on quickness and needs to be physically engaged out there.
Criscuolo - Scored a goal, redirecting Brendan Smith's point shot into the goal. Showed pretty good speed and was engaged most of the night. He just stood out quite a bit. Went 0/5 on faceoffs. Line got hemmed in their own zone a few times and gave up a goal.
Frk - Frk was credited with a shot and a hit in 14+ minutes. Looked pretty good on the powerplay even if he only had one shot on goal. Passed the puck fairly well. At even strength he didn't do much of anything. Like Nastasiuk, Sadowy and Turgeon, Frk is hampered by average-at-best skating and will need others to help him generate scoring opportunities.

Dekeyser-Smith
The Red Wings top pairing (?) had a mostly quiet, effective night.
Dekeyser - Was fairly efficient. DIdn't get in much trouble. Didn't join the offense much (0G 1A 1 shot).
Smith - His game "popped" more than Dekeyser's. Nice shot-pass on Criscuolo's goal. Had a penalty. A fairly ugly giveaway (not reflected in the stats).

Ouellet-Sproul
It's widely believed these two young defensemen, drafted the same year and who've played together in Grand Rapids for three years, are competing for the 7th and final defenseman spot on the roster. If so, give Sproul the edge early in the race.
Ouellet - At times he looks like a smallish, smart, effective defenseman. But sometimes he takes the wrong guy and gets caught running around. Ouellet doesn't get enough credit for his offense. He's got a solid point shot and he gets it on net (3 point shots despite little to no PP time). On the other hand, Ouellet's giveaway in the second period was pretty ugly and the worst of the night for the Wings.
Sproul - The big right-handed D didn't post any points but he did put six shots on goal. He also led all D in icetime (22:34). It was a solid outing. He and Athanasiou were set free on a 2-0 and didn't look so hot, even if Sproul did get a shot. His point shot didn't look as remarkable as advertised. He still seems to get pushed around in the corners far too much for someone who is 6'4.

Lashoff-Russo
Lashoff guy is a free-agent stay-at-home D who looked like he might have an NHL career as a depth guy. Russo is a free-agent offensive D who looked good in his first year in the AHL. They were a good pairing Wednesday.
Lashoff -- +2 with an assist and 3 shots on goal. It's hard to understand why he's content in GR where he's miles from an NHL career. One figures he'd go somewhere where he might have compete for a #7 job. He skates well and plays responsibly and he has size. He doesn't have any great skill and lacks the awareness of a true NHL top 6er, but there may be worse defensemen in the NHL.
Russo - Looked fairly smooth but had a quiet night.

Coreau-Paterson
Coreau - Played a great game against a pretty weak group of forwards. Still, he looked strong. The only thing minor league about him was the way he played the puck behind the net. 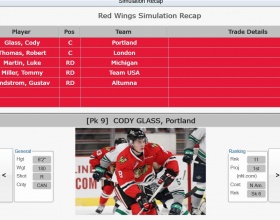