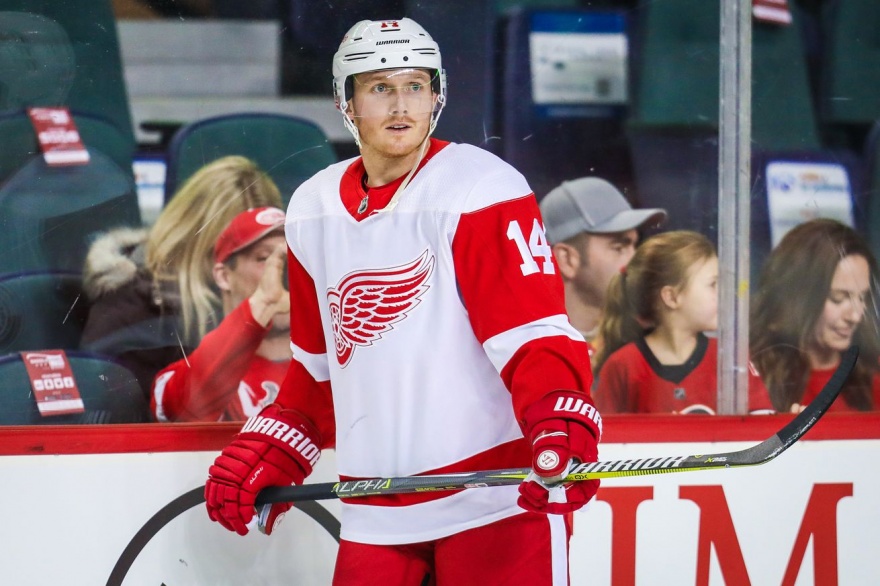 Gus Nyquist is in the midst of a career year. If he keeps up his pace, he'll hit 70 points. With the exception of his break-out psuedo rookie year, when he almost singlehandledly carried the Red Wings while Zetterberg and Datsyuk were hurt, he's never looked this good as a Red Wing.

At 29 years old, he's perhaps young enough to be around when the Red Wings start winning again. Stiill, you have to ask yourself, is it wise to lock up a consistent 40-45 point guy to a UFA contract the year he hits 70 points?

And even if you come down on the yes side of the fence, you face another key question. Shouldn't you trade Nyquist while his value his highest?

The question is, what you get for Nyquist?

To start, let's refer to Holland's own rationale. Agree with or not, he's the GM and he's going to be the guy who pulls the trigger.

"Now I’m a seller and if there’s a deal, we’ll do it. At the same time, we have to look at the players we have towards 2019, because we need to be more competitive," Holland told the Freep Press. "One of our goals it to build a team that will be competitive next season. If I trade away a number of players that can help us next season, unless I get prospect back who is ready to play in the NHL, those assets won’t help us for three, four, years."

So, for this exercise, it sounds like Holland wants something close to an NHL-ready prospect more than he wants a draft pick.

Here's a look at NHL teams who need offensive help, and some of the NHL-ready propsects who Detroit might seek in return.

The Bruins desperately need help for David Krejci's line. While there's a lot of talk that the Bruins want a big, netfront presence like Ferland or Simmonds, Nyquist is definitely a guy who can produce. There's also talk the Bruins need a center. But let's say they settle on Nyquist. Who might the Wings seek in return? Urho Vaakanainen could be a great target for the Red Wings. He's not ready, but he could compete for a job next year. He's probably a little out of our range for Nyquist. What about Jack Studnicka, the C in the OHL? Studnicka vs Veleno competing for a C job next season sounds good. Jakub Zboril will never live up to be drafted ahead of Barzal, but is there anything there? Let's throw out this wild card. If Jeff Blashill hears Ken Holland is talking to the Bruins, doesn't he encourage his boss to go all in, and maybe trade Mike Green and Nyquist while eating salary, to be reunited with his old WMU rearguard, Torey Krug? As great as Krug is offensively, he hasn't had a "plus" season since 2015-16.

Juuso Valimaki, Michael Rasmussen's teammate at Tri-City, would be a good fit. He's very close to being NHL ready and the Flames are rich on defense. Still, he might be more "Mark Stone" return than Nyquist return. Oliver Kylington is another highly regarded Flames blueline prospect. He's looked very good this year.

The defending Stanley Cup champs are apparently looking for forward help. Think Nyquist could play with Backstrom or Eller? The Caps have two prospects that should interest Detroit. One is 6'3 defenseman Alexander Alexeyev, who had a great WJC and is taking another step forward this year in the WHL. He might not be ready for next year. But he's a big, mobile defenseman with great offensive tools. The other option here is Ilya Samsonov. He's struggled at times in Hersey this year but is generally regarded as one of the best goalie prospects in the league and the Red Wings' goaltending depth is a little slim. Samsonov would also make it easier to trade Howard, perhaps.

With teams like Minnesota and Vancouver all that stand between the Avs and a playoff spot, they have to go for it, right? Especially when they have the Senators' first round pick. But who can the Avs offer for Nyquist? One possibility is  defenseman Conor Timmins - but he's been hurt all season. That's too risky for Detroit. What about 6'5 Swedish goalie Adam Werner? The 21-year-old is near the top of the Swedish league in GAA and save percentage. Maybe Werner and Timmins for Nyquist? Werner could make a splash in the AHL or NHL next year. Timmins? Who knows.But he's a smart, 6'2 right-handed defenseman who can move the puck and play defense. Timmins and Hronek for 10-15 years sounds pretty nice.

You're not getting Dante Fabbro. But what about David Farrance? The 19-year-old sophomore's offense is coming along at Boston U, where he has improved from 3-6-9 in 31 games to 4-10-14 in 25 games. Farrance is undersized at 6'0, but he's a terrific skater and can transport the puck in traffic. To be fair, Nyquist probably should land a bit more than Farrance, who was a third round pick in 2017. Nashville might need to throw in a third round pick or a depth prospect like C Patrick Harper or Rem Pitlick.

So, who might the Red Wings pluck from the Islanders' system. Well, the Isles had a great 2018 draft, but it seems unlikely they'd part with their top picks from the draft. Nor are those players very close to being NHL ready. Given Detroit's connections with the Saginaw Spirit, one must think they'd be high on 2018 draft pick Bode Wilde, taken 41st overall. But good as he's been, he's got a lot of developing to do. One interesting prospect is Kiefer Bellows. Drafted 19th overall in 2016, Bellows starred at the WJCs in 2018. But at 20 years old, he's scored just 11 goals at the AHL level. He's also taken a strange route since draft day. Plus, he's a winger. Another winger who might be interesting is 6'5 20-year-old Otto Koivula, who has 13 goals and 19 assists in his AHL rookie campaign. And there's 23-year-old polarizing won't-be-a-prospect-forever Josh Ho-Sang. The Red Wings are stocked at wing. Unless the Islanders are moving Wilde, this doesn't seem like a good fit at all.

The Hurricanes, if they can stay in the playoff picture, need offensive help. And they've got defensive prospects who are very close to breaking through. Jake Bean, 20, was drafted seven spots ahead of Cholowski. He's a 6'1, left-handed defenseman who does a lot of things well. He's having a solid AHL rookie campaign and earned a quick callup to the NHL.Haydn Fleury is a bit older, at 22. The 6'3 left-handed defenseman already has 79 NHL games under his belt. It's hard to say how much upside he has. Another attractive option is Adam Fox, a Flames pick who's a junior at Harvard. He's having another great year, but he's one year a way from unrestricted free agency - and that could scare Detroit away. Getting away from defense for a minute, what about big right-handed center Julien Gauthier. He may never be a big-time scorer, but can you imagine a line with Rasmussen and Gautheir? Another possibility is center Janne Kuokkanen, a solid AHL producer with a two-way game. There's another giant right-handed center named Nicholas Roy who is also getting very close to being ready at 22 years old.