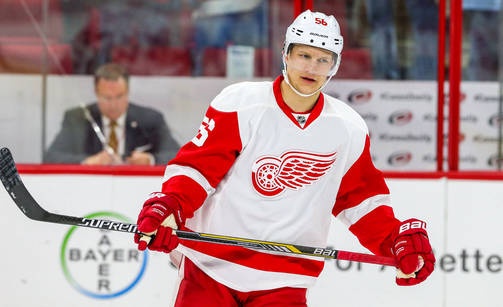 Angst is high among Detroit Red Wings’ fans after the team lost two players in two days without a thing in return.

What did the Wings lose?

Pulkkinen is a 24-year-old right wing who tore up the AHL. In 2014-15 he scored 34 goals in 46 games. In the playoffs he added 14 goals in 16 games. Last year Pulkkinen was off to a decent start, sometimes playing with Tatar and other times playing with Larkin. Through 21 games he had 6 goals and 5 assists in just 12:45 a night. That projects to more than 20 goals and 40 points over the course of a season. But Pulkkinen started seeing his ice-time fall when Pavel Datsyuk returned from injury (Nov. 13). And then Brad Richards returned on Nov. 20. Then Pulkkinen hurt his shoulder. He returned Jan. 17 to play just 12 games and tallied just one assist, playing only 9:52 a night, often with fourth line grinders.

In the offseason he had surgery on the other shoulder. He came back from that surgery nearly a month ahead of schedule and looked ineffective in the preseason.

Pulkkinen is a guy with 30-goal potential. He’s small. He’s not fast. He’s not effective on the boards. He’s a little easy to push off the puck. But he’s got 30-goal potential. You can set him up in that Ovechkin/Stamkos role and he’s going to score for you. You’ll need to shelter him at 5-on-5, but sometimes that’s the price you pay for a sniper.

The Red Wings already have a bevy of small forwards, most notably Henrik Zetterberg, Tomas Tatar and Gus Nyquist. It’s easy to understand the concern about size. But this is a team that also employed Pavel Datsyuk and Brad Richards last year, and they have since retired.

There are many questions about Pulkkinen. If the Wings believed in him, why didn’t they give him a regular role on a scoring line? If they didn’t, why didn’t they trade him while his value was sky high?

Another question is, why did Holland waive Pulkkinen if they created a spot by putting Niklas Kronwall on IR? They had the spot.

Martin Frk is a different matter.

Frk, 23, never played a game for Detroit. Frankly, a little like Andrej Nestrasil and Tomas Kopecky, Frk just didn’t seem like much of a prospect for Detroit until his third year of professional minor league hockey. Frk was drafted in 2012 after scoring 16 goals and 29 points in 34 games in the QMJHL. He followed that up with a 35-49-84 stat line in just 56 games. Even better, in 17 playoff games he posted 13 goals, 20 assists and 33 points.

In Grand Rapids, Frk was playing behind veterans like Miele, Porter and Zengerle. Older prospects like Callahan, Ferraro and Nosek were also taking top 9 ice-time and powerplay time. Athanasiou and Mantha were also high-scoring prospects with NHL size, and they demanded icetime.

Frk, at 6’0, 200 pounds, isn’t small. He’s known for a heavy shot and he’s not afraid to mix it up. Like with Pulkkinen, skating is an issue for the right-handed sniper. But Frk has made progress in this regard since being drafted.

Finally, in his third year, Frk broke through with 27 goals in Grand Rapids. He also gained some fans among Wings die-hards who watched him score two goals in pre-season games this year.

It’s hard to say what the Wings lost in Frk. His scouting report is much like Pulkkinen’s, but he’s not as dynamic an offensive player. He’s also got many of the same flaws, even if he’s bigger and stronger.

It will be interesting to see if he sticks with the Hurricanes.

The frustration here is that the Wings held him out of the top 6 for so long in Grand Rapids. Yes, he had work to do. But he was playing behind too many people who didn’t have a future in the organization. In a situation that looked a lot like the Nestrasil situation, he finally got a top-6 job in GR and kept his hopes alive. Then he comes to camp and looks like a player in the preseason. And then he’s waived. (Nestrasil at least played a few games with the Red Wings before he was waived).

It’s frustrating to see assets misused or misspent. Yet, Wings fans concerned about losing the next Frk or Pulkkinen should be somewhat grateful they are gone. Because had they cleared waivers and gone to Grand Rapids, they’d be taking the top-6 icetime we need for Bertuzzi, Mantha and Svechnikov. As it is, the Wings have loaded up the Griffins with a bunch of no-future players who are going to take their ice time.

So congrats to Pulkkinen and Frk. You’re now playing for an organization that wants you. Make the best of it.

In the meantime, Red Wings fans need to prepare for future waiver-wire losses of Tomas Jurco and Ryan Sproul.