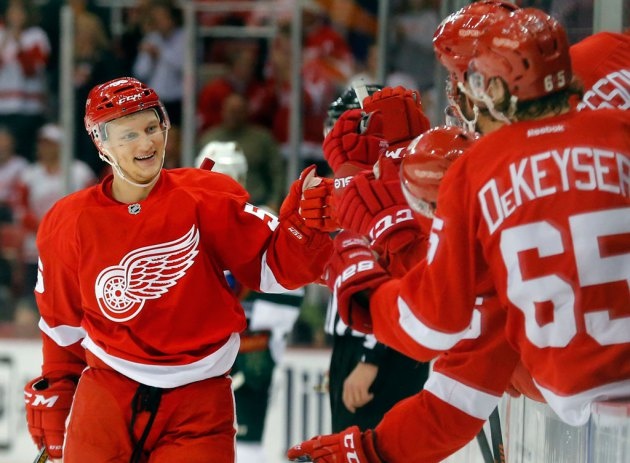 If the Detroit Red Wings are going to make a splash in the free agency market this summer, they'll need to find a team to take Pavel Datsyuk's contract.

Edmonton Journal sportswriter Jim Matheson suggests the Carolina Hurricanes might be that team, and that instead of a draft pick, the Hurricanes would demand underused offensive forwards Tomas Jurco or Teemu Pulkkinen.

It's unclear how likely this is, or whether this is a wise use of assets. First, Ken Holland has suggested he's not interested in trading away significant young assets to spare the Wings a $7.5 million cap hit for a player in Russia.

If Datsyuk not here, "like to move the cap space. But if price lots of futures, doesn't make sense." - Ken Holland

This quote is nearly two months old and it was given right after the Red Wings were ousted from the playoffs.

It's not difficult to understand Holland's position. Is it a good idea to trade away a good young player for one year of cap relief?

In most off-seasons, the answer would be no. But with all star Steven Stamkos likely to hit the market and Detroit desperately needing star center under the age of 30, maybe now is the time to throw caution to the wind.

On the other hand, does Holland want to throw away a young player for the chance to get in a bidding war with Toronto for Stamkos?

Tough question. And before you answer it, ask yourself this: Are Pulkkinen and Jurco all that good anyway?

Both players have been bit players at best for the Red Wings over the last two or three years. But both players have tremendous untapped potential. Jurco may lack the intensity to be an elite NHL, but he's got the hands and the size to be a solid middle six player. Pulkkinen lacks Jurco's size and he's not a great skater, but he's got one of the hardest shots in the NHL. He's going to be a goal scorer for someone in the NHL. Even if he's a five-on-five liability, he's got powerplay specialist written all over him.

If the Wings trade one of these guys and free up the cap space and land Stamkos, then give GM Kenny Holland a pat on the back. But what if he trades Pulkkinen away and he turns into a 30-goal a year powerplay specialist and Stamkos goes to Toronto? What if Jurco becomes a 20-goal 40 point middle six forward with size and Holland strikes out in the free agent market?

The shame here is that Mike Babcock and Jeff Blashill have mangled the development of these two kids. Had these guys been given regular top six minute/middle six minutes and powerplay time all year, it would a lot easier to decide whether or not to risk trading them for one year of cap space.

Instead, Holland faces enormously difficult questions with lots of potential for these moves to blow up in his face.