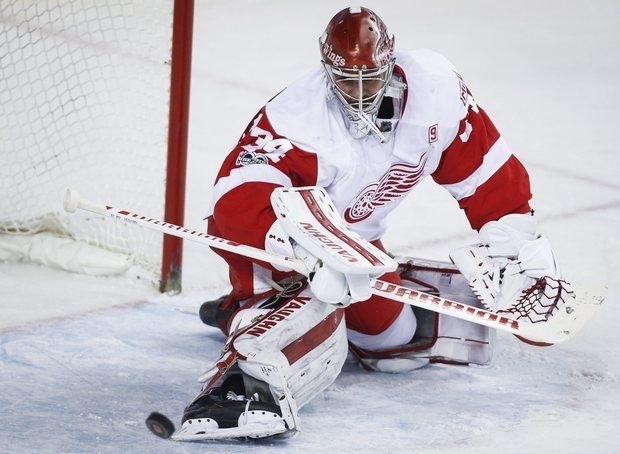 When you don't make a decision, the decision makes you.

That's where Ken Holland has been for six years.

The writing has been on the wall since 2011. It was time to start actively rebuilding the Red Wings with youth. Instead, the Holland continued to trade away picks and prospects for veterans (Kyle Quincey, David Legwand, Erik Cole) who helped the Red Wings accomplish nothing in Detroit.

It's been a slow, gradual decline. But we're here. The playoff streak is in the rearview mirror. One hoped this might bring some sense to Ken Holland. Instead, he's still talking about the goal to make the playoffs and "play meaningful games" at the Little Caesars Arena next year.

As Craig Custance pointed out in The Athletic, this may leave Detroit in a strange purgatory.

Holland is all to casual about his gamble and appears to be thinking in a dangerous binary mode.

If I’m wrong,” Holland said, “your plan is going to work.”

What he’s suggesting is if he can’t build a winner his way, the team ends up in the lottery anyways. But it may be worse. The Red Wings could end up in hockey purgatory where they'd have a lot of company.

Here's what purgatory means. From about 2002-03 until 2013-14, the Leafs were mostly a playoff bubble team. Mostly, they failed to make the playoffs. But they were good enough to be in the picture until the final two weeks of the season. They were good enough to pick 7th to 16th and never bad enough to pick in the top 5. When did Toronto become the best bet to be the next great Eastern Conference team? When they drafted Mitch Marner and Auston Matthews in back-to-back years with top five picks.

Having Matthews and Marner makes a William Nylander even more valuable. They make Morgan Rielly potentially a good piece on a winning team - instead of a freelancing defenseman eating up minuses on a bottom feeder.

Right now, Ken Holland is entering John Ferguson Jr./Brian Burke/Dave Nonis territory. Toronto didn't turn the corner until Lou Lamoriello and Brendan Shanahan committed to a real rebuild. They sold off the veterans. They sunk to the bottom of the standings. And they were fortunate enough to get Auston Matthews.

Toronto isn't the only team to tread water in purgatory. The Calgary Flames spent about a decade there. The Flames got some good young pieces in the draft and have turned it around. But they're still a long way from having the kind of pieces you want to be a contender. How about the hapless Jets. Teemu Laine was their first lottery pick of this decade. Despite having lots of good pieces, the franchise still wasn't any better than the Red Wings last year. They probably still need the kind of center you'd get with a top five pick.

In Detroit, Ken Holland is taking aim at the venters. That probably means the Red Wings will not trade off veterans. It means the Red Wings will probably try to sign help in free agency. It's why guys like Helm and Abdelkader will play more than Athanasiou. And it's why Detroit protected 33-year-old, injury prone, not-very-good goalie Jimmy Howard and exposed 25-year-old goalie Petr Mrazek.

There's very little reason to expose Mrazek. Howard, even if last year's numbers aren't a fluke, is unreliable because of his injuries. Howard is more expensive. He's got more years left on his contract. He's got no upside. And NHL goalies don't usually age well at 34 and 35.

Mrazek, despite an awful season, still has tremendous upside and virtually everyone in the NHL has seen it.

There's no point in dignifying the media's character smears about Mrazek's work ethic or attitde. That's just how a once-classy organization does business these days -- they smear players as they leave town to lessen the fan/media blowback.

Mrazek can still be a very good goalie in this league for the next 8-9 years. He has the ability to be better than he was last year. He also has the ability to build trade value. A year ago, if Detroit wanted to shop Mrazek, they could have picked up a good asset. Instead, they've exposed him for nothing. Jimmy Howard will almost surely never have any trade value. He's been available for two full years with no takers. Coming off an injury-riddled season at 33, his value continues to slide.

Apparently Holland believes that Howard is the goalie who gives him the best chance to make the playoffs next year. That's a lousy bet. But it's also a stupid bet.

All bets about next year should be about the growth of the young Red Wings players.

This is what rebuilding is. It's about giving Mrazek, Athanasiou, Anthony Mantha, Tomas Jurco, Teemu Pulkkinen and company the chance to play in big moments.

Instead, Holland chose to waste his rebuilding years by signing lifetime deals to grinders and third-pairing defensemen.

Oddly enough, Holland's vision for winning is what guarantees this team's mediocrity. It just might not guarantee this team will be as bad as it needs to be in the short term if it is to ever rise from the ashes.