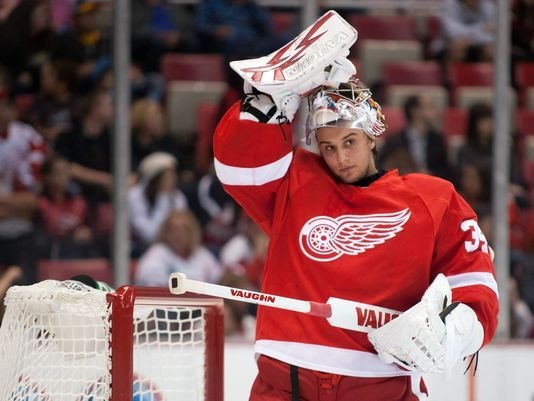 Bob Kaser, announcer for the Griffins, had just signed off for a commercial after introducing the next segment with General Manager Ken Holland, when he began speaking, presumably to Holland during a commercial break. As is often the case with AHL streams, the audio continued. In this case, you can only hear Kaser. He asks Holland what's new.

And then he says:

"Try and trade... trade Mrazek?" he says before he chuckles. "Trade Petr? That's the sense I get."

At times you can hear Holland speaking. Perhaps someone with NSA-level audio enhancement abilities can get both sides of the conversation.

Unless one of Mrazek or Jimmy Howard are traded, one will be exposed in the expansion draft.

Conventional wisdom is that the Wings would not risk losing the younger, cheaper Mrazek, who could still reach that high level he showed in the 2015-16 season. But the 25-year-old netminder from the Czech Republic was awful for Detroit last year, even if he was better from February-April. He didn't do himself any favors with a mediocre performance in the World Championships this spring.